Captivating natural beauty and tranquil village life surrounded by unending highlands and tropical rainforests full of exotic wildlife – this Southeast Asian country also has islands and beaches that are among the finest in the region, and a cuisine that is possibly one of the most delicious you will taste.

Land of the Ascending Dragon

Eager travelers hoping to experience the lifestyle and culture so vastly different from their own are all flocking to Vietnam to experience shimmering paddy fields, sugar-white beaches, ancient cities and hallowed pagodas.

Apart from the gorgeous landscapes of Hanoi and Halong Bay, Vietnam’s remote highland regions showcase the deep-rooted culture of the ethnic minorities who reside there – elaborate tribal costumes, age-old customs and communal longhouses await those visitors who are ready to venture.
Cambodia – An Empire of Temples There’s a mystique about this alluring yet perplexing kingdom that casts a spell on visitors. Here, ancient and modern worlds collide to create an authentic adventure.
The mighty Khmer empire, ruled much of what is now Laos, Thailand and Vietnam. The remains of this empire can be seen at the fabled temples of Angkor Wat, the ultimate expression of Khmer ingenuity and wealth.
Angkor is sublime and matched by only a few places on earth. Cambodia is more than its temples though, as its urban areas thrill visitors with their sophistication. Chaotic yet charismatic capital Phnom Penh is a city famed for its sumptuous riverside, cultural renaissance, and top notch dining experience. Inland are the Cardamom Mountains, a gateway to ecotourism adventures such as river rafting down the mighty Mekong River.

The origins of the Vietnamese people are a combination of the Mongol races of north and east Asia, with Chinese and Indian influences. About seven million of these ethnic minorities or montagnards (French for mountain people) live in remote, lightly populated mountain regions in northern and western Vietnam. Spiritual life in Vietnam is a grand panoply of belief systems, including Confucianism, Taoism, Buddhism, Christianity, and Tam Giao. The most important festival of the year is “Tet”, a week-long event in late January/early February that heralds the new lunar year and the advent of spring. The celebration involves a contrast of feverish and raucous festivity (fireworks, drums, gongs) as well as quiet meditation. In addition to Tet, there are about twenty other traditional and religious festivals each year. Vietnamese cuisine is one of the most popular in the world. Deeply influenced by the national cuisines of France, China, and Thailand. One of the most unique flavorings is the national condiment Nuoc Mam, a piquant fermented fish sauce that is served with every meal. Cha Ca is another unique dish made of sizzling chunks of fish seasoned with garlic, ginger, turmeric. This dish is so popular that there is a street in the capital dedicated to it! If you are visiting Vietnam in the summers, don’t forget to try Che, a dessert made of layers of bean jelly, coconut milk, fruit, and ice.

Snake wine is a common drink in this region for those who want to increase vitality!

Spend a night in Han Son Doong, the largest cave in the world! 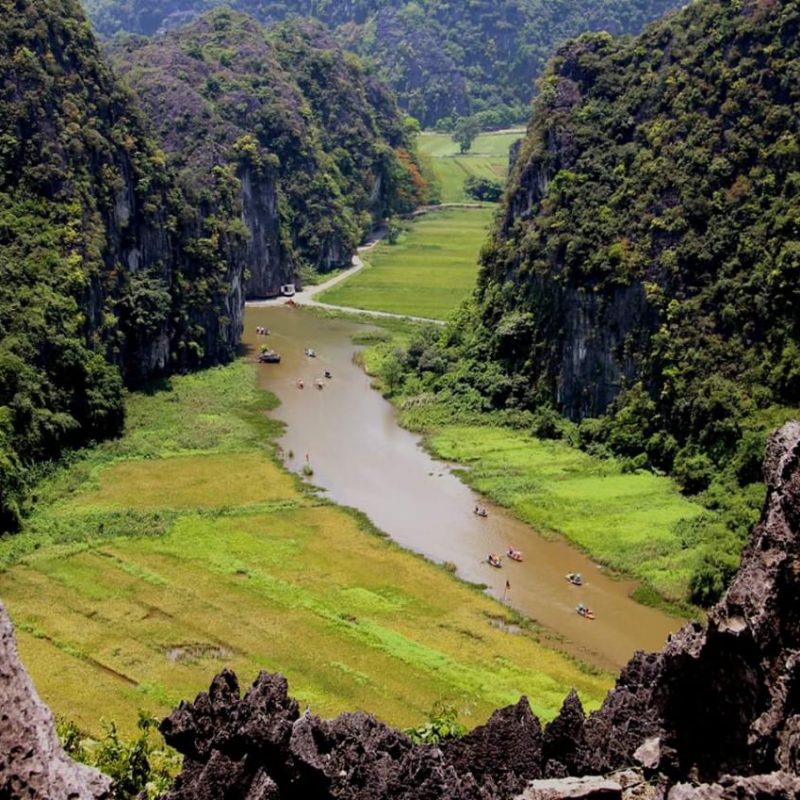 Our recommended itinerary for a classic Vietnam and Cambodia!

Day 1: Arrival in Hanoi.
Day 2: Travel from Hanoi to Halong Bay to cruise amongst the bay’s spectacular scenery. Also indulge in a local gastronomical experience as you spend the night aboard.
Day 3: Greet the day with the traditional Tai Chi exercise, kayaking in the bay and a cooking demonstration before returning to Hanoi.
Day 4: Explore historic sites of the ancient Asian city of Hanoi and fly to Siem Reap.
Day 5: Discover the gorgeous temples and architectural marvels of Angkor Wat.
Day 6: Take the famous silk making tour at Puok.